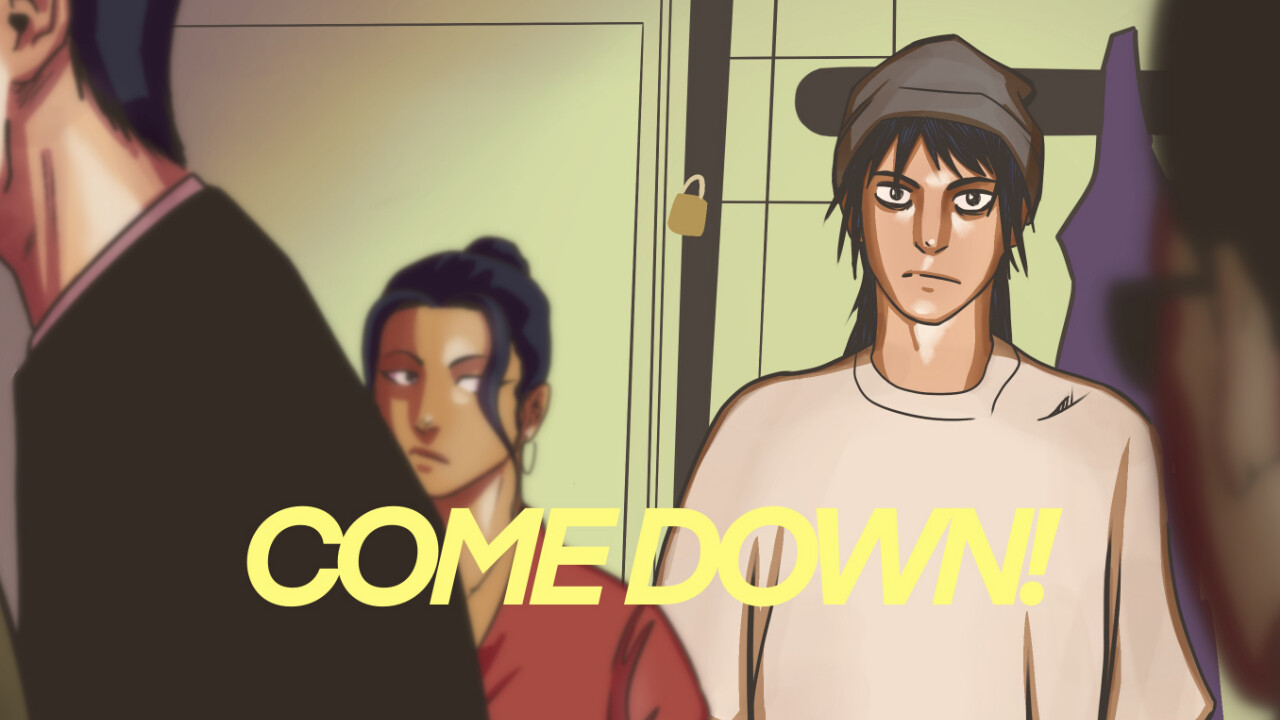 Come Down is a graphic novel written and drawn by me, Sola Simpson. And I need your support to finish it. 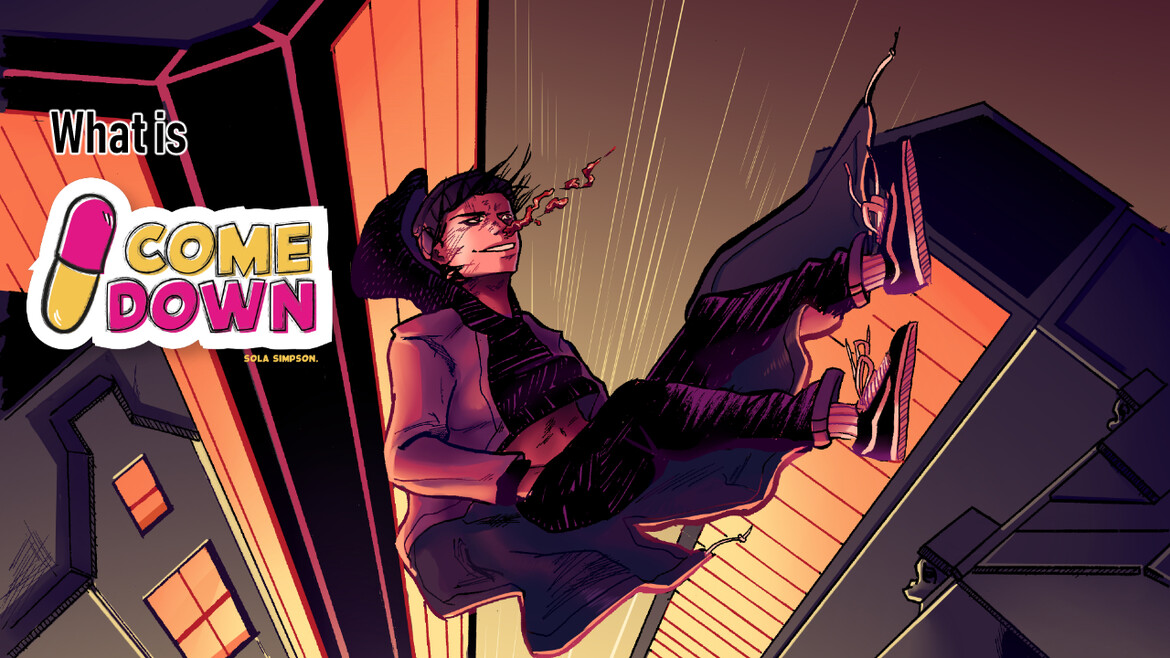 Arsen is a pretty unremarkable guy, he wanders through his early 20s aimlessly, not thinking about anything beyond his next night out. This all changes after he steals pills that give him short term magical powers, dragging Arsen into a world of gangs and violence in the magical underbelly of London.

Our hero, Arsen, is having a pretty bad evening. None of his friends want to hang out with him and to make matters worse, his dealer is cutting off contact. Despite all this, Arsen is still trying to party.

In a stroke of luck Arsen finds some pills on someone who's passed out. Little does he know these pills give him short term magical abilities. What started as a normal night only goes downhill after that. Tracked down by the owner of the pills Arsen is forced into his employ. 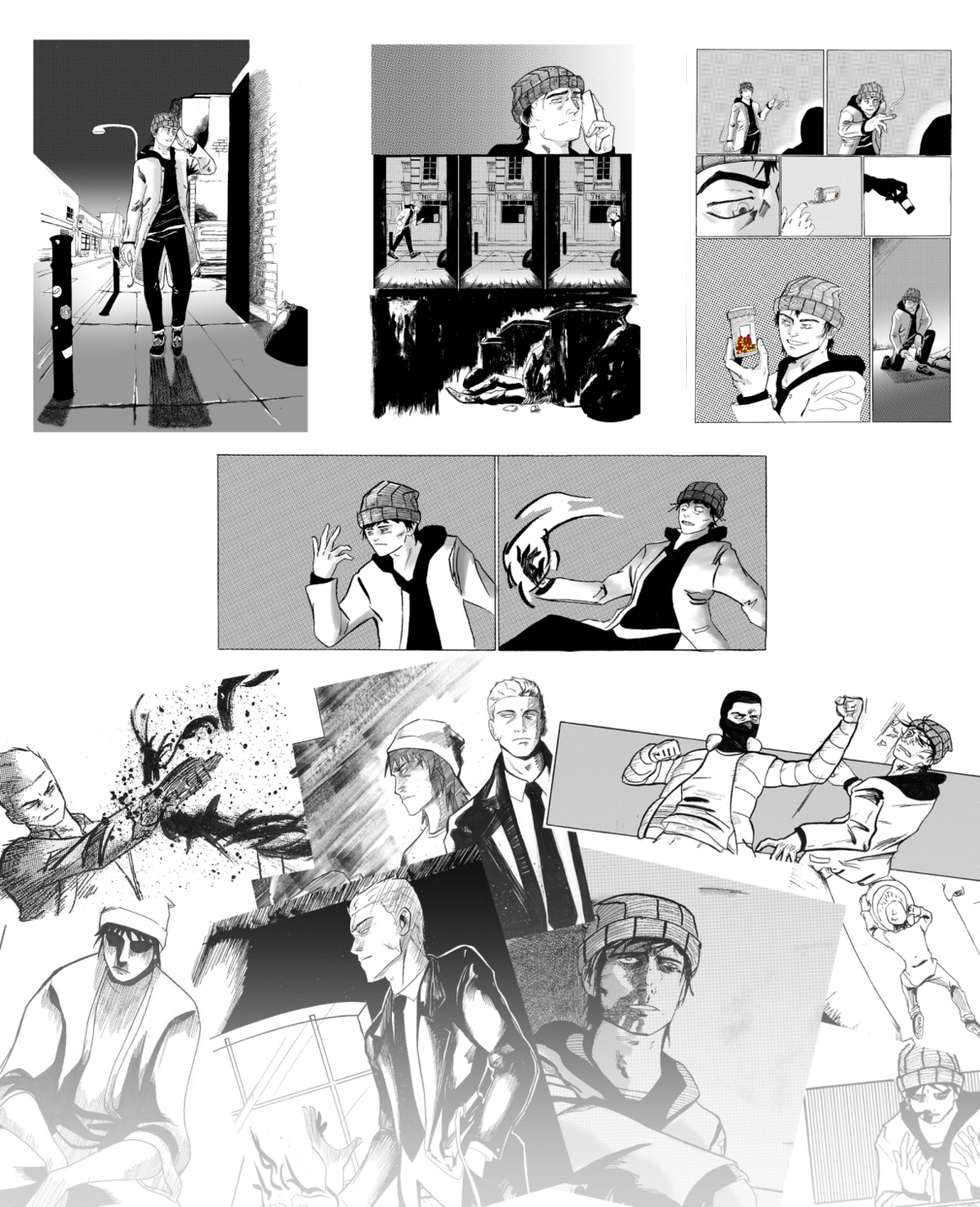 Arsen was always looking for the next party. Now he's in over his head. 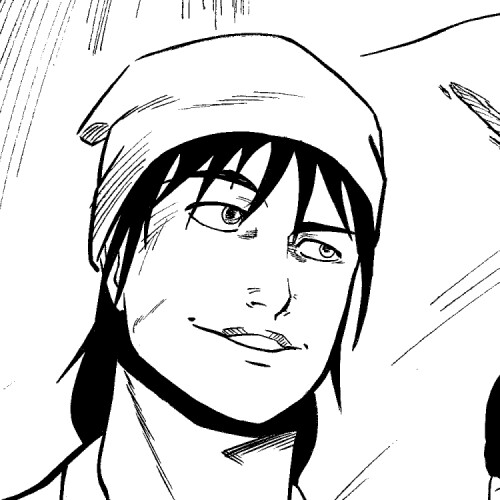 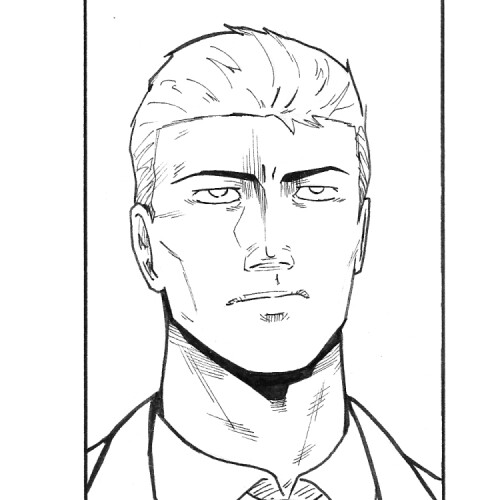 Mia is deep in the magical underworld, trying to claw her way out. 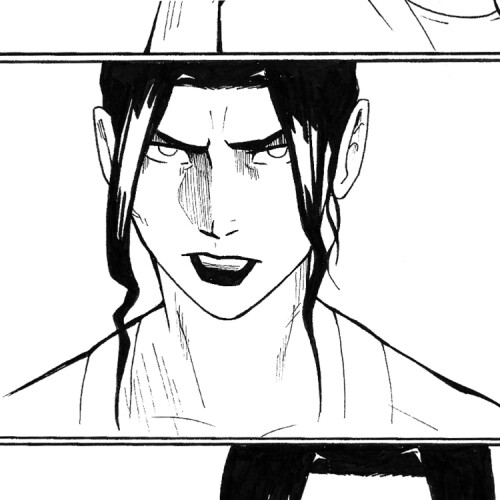 These three are all brought together by chance, and need to navigate the underworld without being being devoured by it. 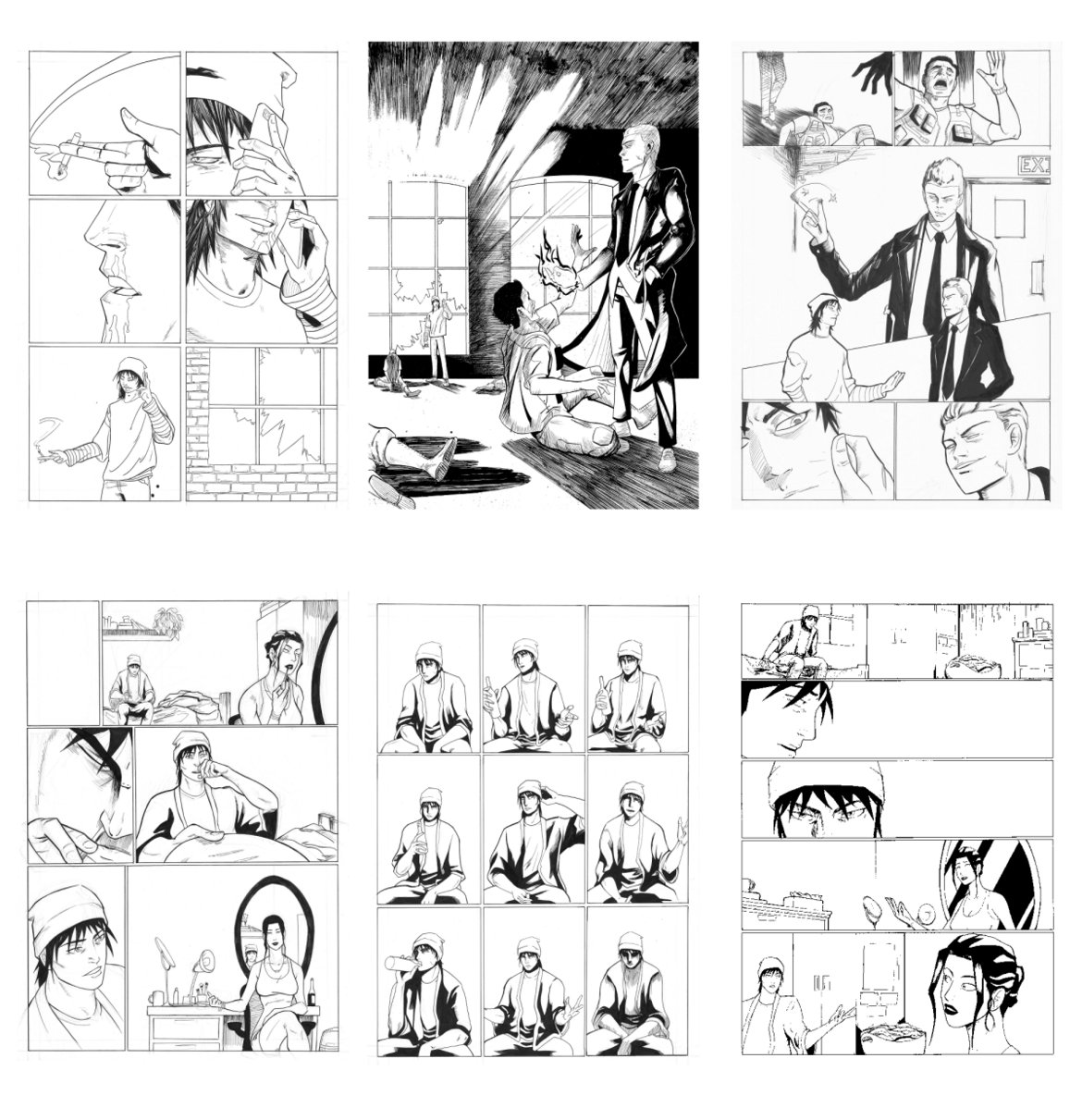 Come Down has over 120 pages drawn so far out of an estimated 210 pages. Crowdfunding will help cover the costs of finishing production and printing once it's all finished.

I've been working on Come Down on and off for about four years now, drawing over 120 pages so far. It's been a passion project of mine, doing it all for free and releasing some of it online to read for free. Since I'm in the last third of production I'm looking to raise the funds to get it printed once its finished.

I'm aiming to have the book finished by May 2023

Come Down is projected to be 210 pages long, so I'm a little over halfway done. I've got the rest of the story scripted out, all that's left to do is draw it. My generous estimation is that the artwork should be wrapping up in May 2023, with the comic going to print in June/July if everything goes to plan and sent out to backers shortly afterwards. Once you've donated you'll be getting regular updates on my progress so you're never left in the dark. 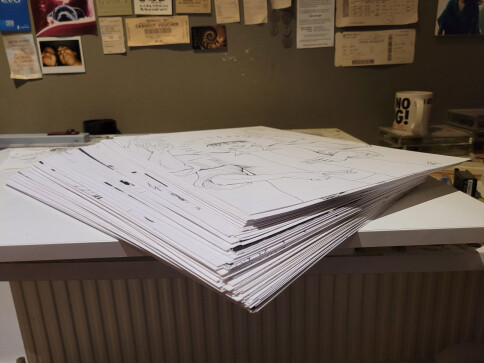 What's in the book?

The finished print size of Come Down will be A5 Portrait (210mm x 148mm). The books interior art will be entirely black and white, with the covers for each chapter being in colour.

The book will obviously include the entirety of Come Down, all 200+ pages. There won't be a cliffhanger ending or a "wait for part two". You'll have the entire story.

Bonus behind the scenes info. Character sheets, thumbnails, script excerpts. A glimpse into how Come Down was made. 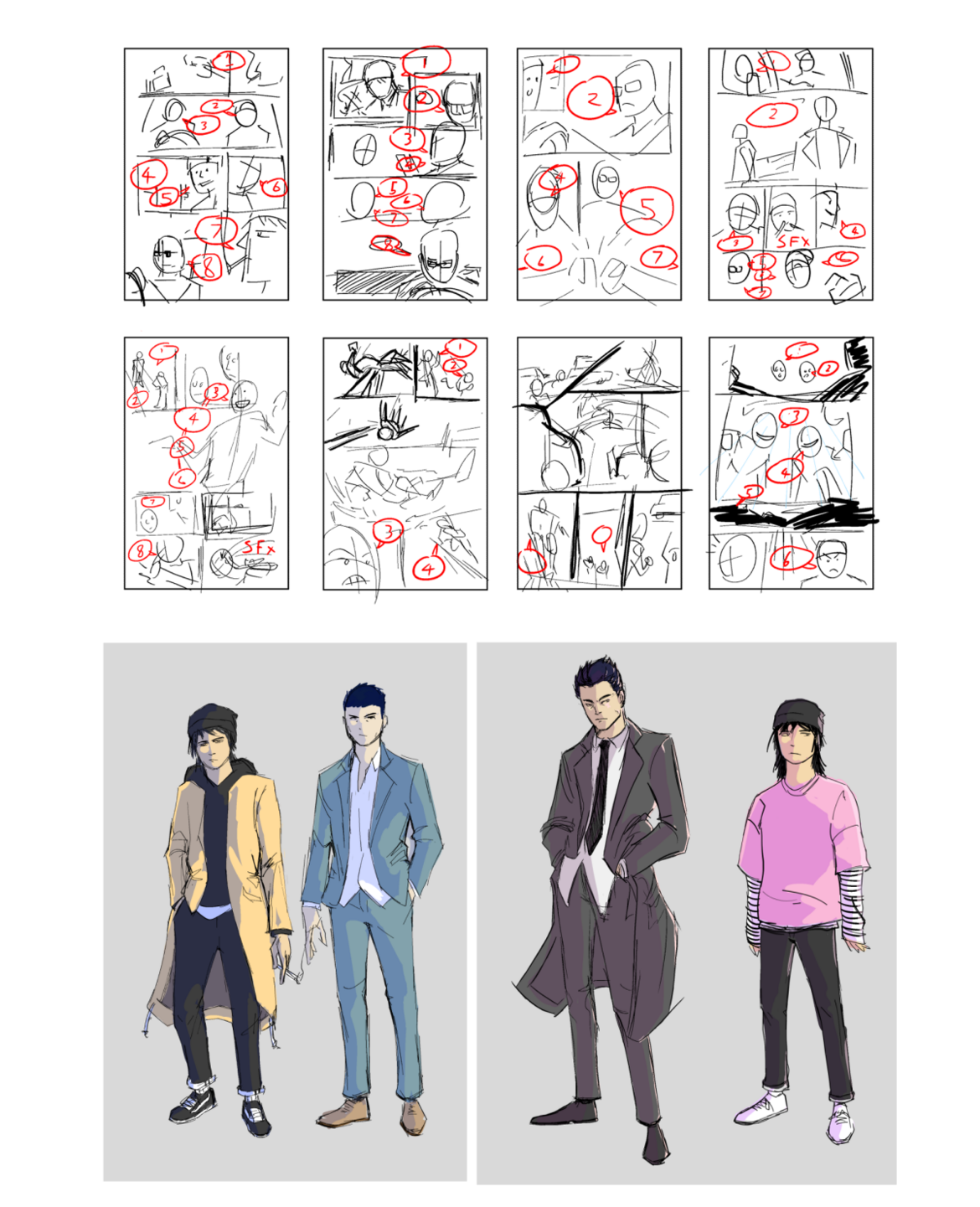 Music has played a huge part in the influence of Come Down, to pay homage every chapter will come with an accompanying album cover artwork. There'll be 8 of these in the finished book. 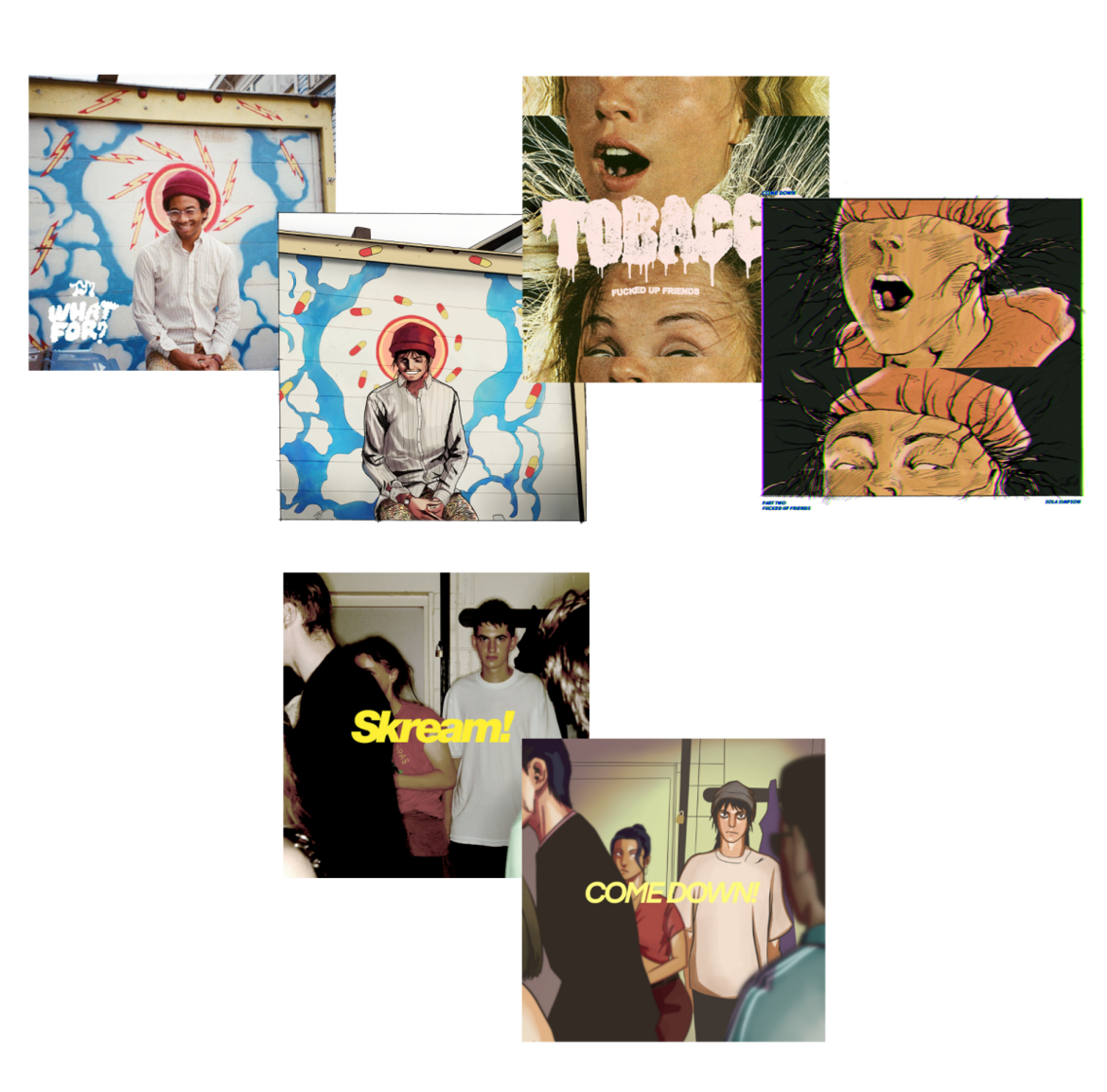 I will only be shipping to the UK!

Shipping is expensive and can be difficult. This is my first Crowdfundr, so to keep things simple I'm sticking to domestic shipping. I apologise to anyone out of the UK who wanted a copy! 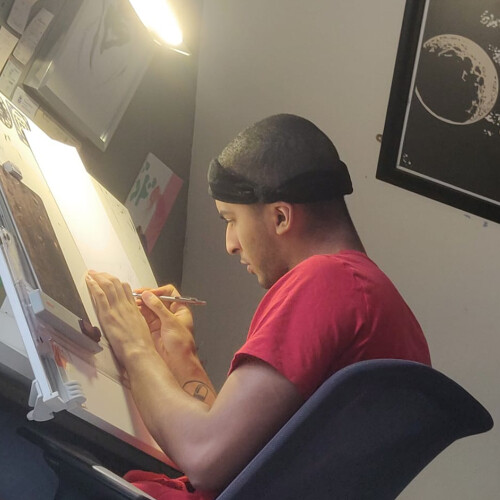 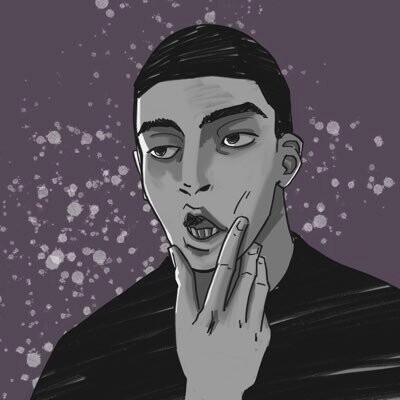 Hi I'm Sola, as I'm sure you can tell. I'm the author of Come Down. When I'm not drawing you can find me reading comics, being bad at fighting games and bothering my friends over a pint of cheap beer.

Why comics instead of literally any other medium? An obsession with Spider-Man got me drawing at a young age, an obssession that's not entirely gone away. Years. Twenty years later and here I am, finally making my own graphic novel. After an internship at London based publisher TPub (check them out) I set out to work on my own stories and make my mark on the art world. I've tabled at comic conventions up and down the country, including Thought Bubble and MCM Comic Con, telling people all about this comic I'm working on that'll come out eventually, one day, soon, hopefully >_> 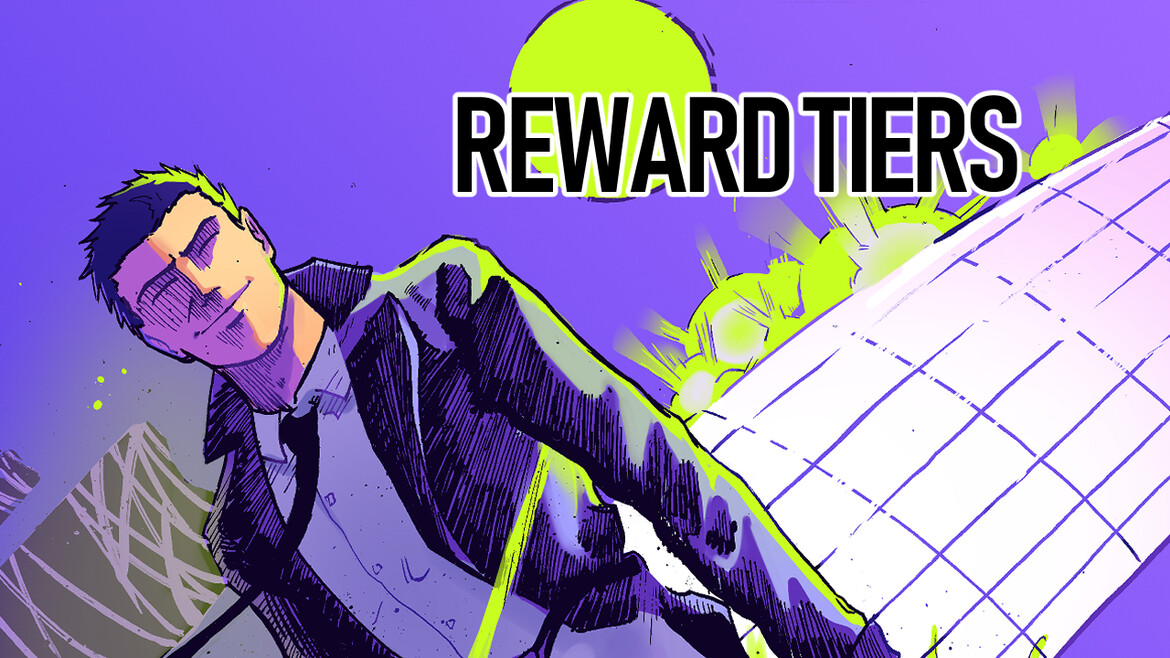 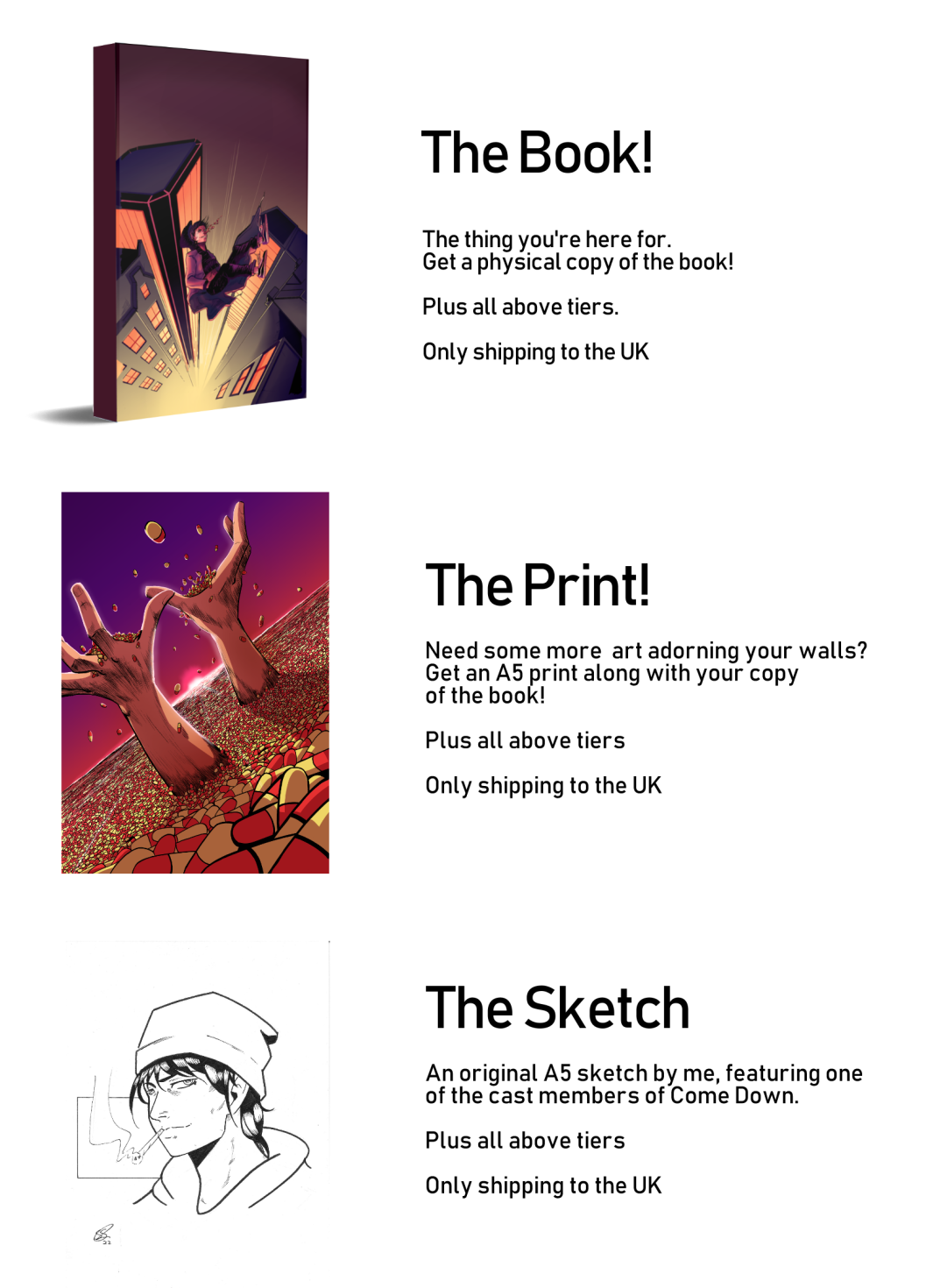 Come Down is a solo project, everything to do with its production is down to me. This unfortuntely means if any aspect of production is delayed the entire project is slowed down as a result. If I get Ill, hit by a bus or the UK sinks into the ocean that'd obviously hinder my progress. Jokes aside, any delays/unforeseen issues come my way, you'll be the first to know. There'll be 100% transparancy between myself and the backers through frequent updates on my progress. There's the obvious risk of the project being delayed, but you'll all be the first to know.

This is my first attempt to print a comic, this is all new to me. I've done my research and am doing everything I can to make this run smoothly. That being said I've been told nothing ever goes to plan, there's a decent chance I'll have to adapt to a new challenge in the process.

If you've read this far, thank you very much for your time. It really means a lot. Whether you're donating or just browsing I appreciate you taking the time to indulge in my work.

Hope you have a lovely day and thank you! 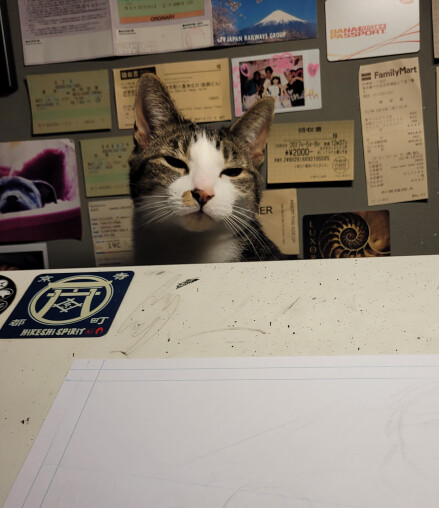 Your name in the backers
£5

Have your name printed in the back of the book. Immortalised!

A digital copy of Come Down.

Your name is also in the backers! 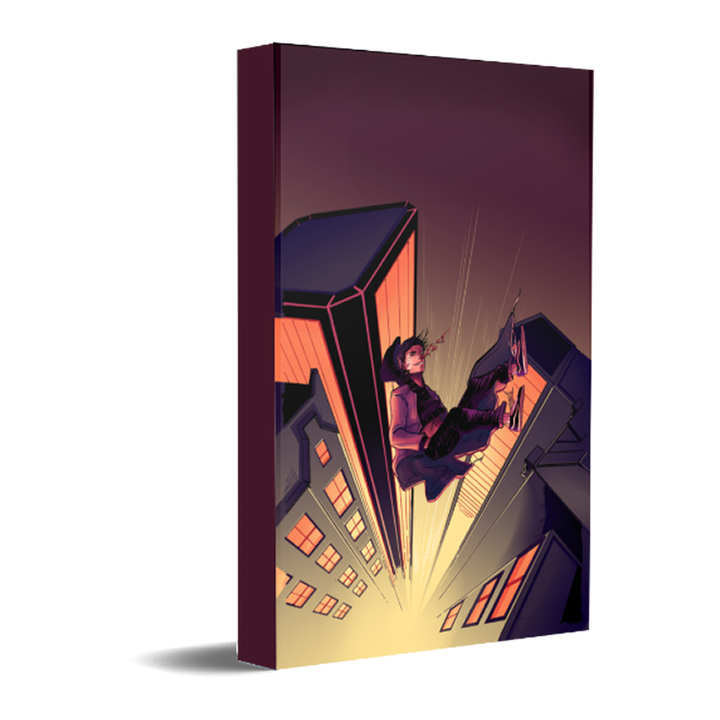 Get a physical copy of the book!

Plus all above tiers. 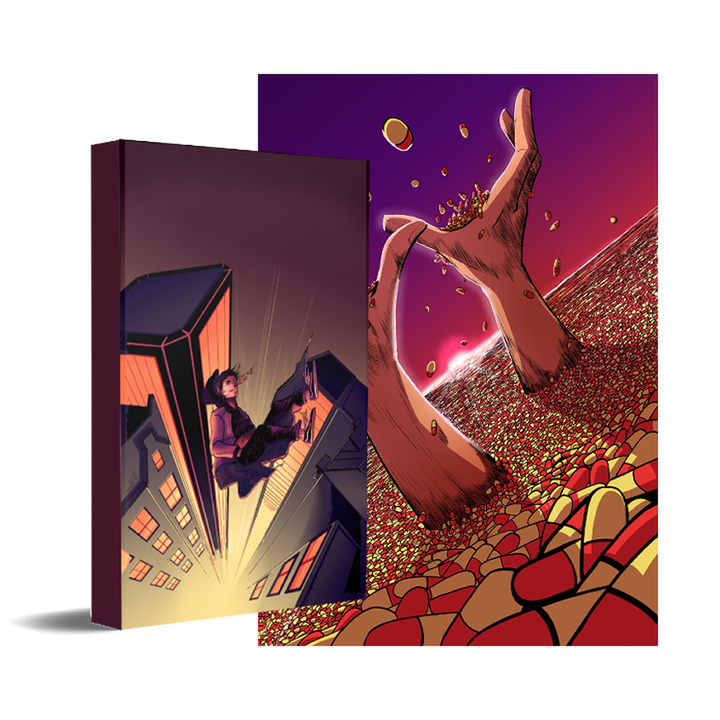 The book + signed A5 print!
£20 + shipping
Ships to United Kingdom

All of the above + a signed A5 print! 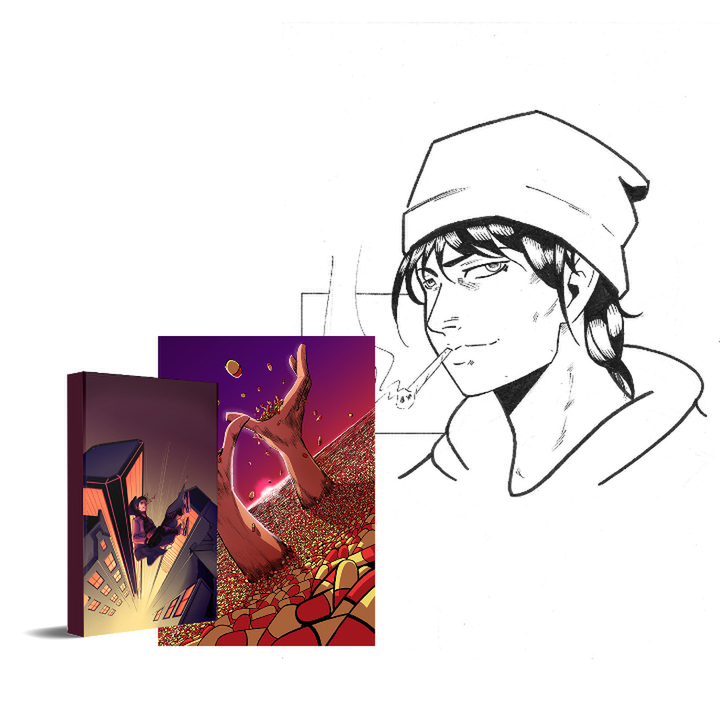 The art will be of a Come Down cast member.

Since I'm still making the comic I can squeeze your beautiful face in as a background cameo in the second half of the comic.

Sola Simpson is managing the funds for this campaign. The campaign is for a personal cause.